Cricket fever is on its peak as the mega event of cricket ICC World Cup is entering into its last moments and the 1st match of this tournament is scheduled to be played on 30th May 2019 between England vs South Africa at Kennington Oval, London. 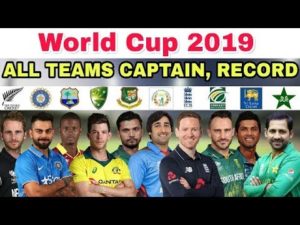 Well ICC World Cup is a certified platform for all cricketing sides to set some memorable cricket records. Given below are the records regarding Scores made in all previous editions of the ICC World Cup.

36 runs are the lowest ever total made by Canada against Sri Lanka back in 2003 whereas the 2nd lowest total of World Cup is 45 runs which were made by Namibia against Australia in the group stage match of World Cup 2003.

Most Runs by a batsman in World Cup Cricket

Sachin Tendulkar with 2,278 runs is the highest run scorer in all previous editions of ICC World Cup who is followed by Australian skipper Ricky Pointing with 1743 runs in World Cups. Virat Kohli world cup runs L,M

The record of most centuries made by any batsmen in all editions of World Cup is titled to Sachin Tendulkar who scored 6 centuries whereas Ricky Pointing and Kumar Sangakkara is placed on 2nd place with 5 centuries each.

Kevin O Brien has scored the fastest century in ICC World Cup against England as he played only 50 balls to reach this record. Glenn Maxwell from Australia with 51 balls century is placed on 2nd number of this list.

With 21 fifties, Sachin Tendulkar is holding the record of most fifties maker in ICC World Cup whereas Kumar Sangakkara with 12 fifties is placed on 2nd position.

Brendon McCullum with 18 balls fifty is the fastest in ICC World Cup against England in 2015 whereas the 2nd fastest fifty is scored by Angelo Mathews while played 20 deliveries against Scotland.

Chris Gayle and AB de Villiers with 37 sixes are the most six hitters in ICC World Cups whereas Ricky Pointing is 2nd on list with 31 sixes in his career.

Most Runs in World Cup:

Highest Score by a Batsman in World Cup

Now we will check the records of Highest Run Scorer In World Cup History  The highest score made by any player in ICC World Cup is 237 which was made by Martin Guptill against West Indies back in 2015 whereas Chris Gayle with 215 individual runs against Zimbabwe is placed 2nd on this list. These all players were the Highest Score In Cricket World Cup

Marlon Samuels and Chris Gayle have made the highest World Cup partnership as both these players have scored 372 runs against Zimbabwe.

The 2nd highest partnership was made by Sourav Ganguly and Rahul Dravid with 318 runs.

With overall 62 victories in all previous editions of ICC World Cup, Australia is present on top whereas New Zealand is 2nd on this table with 48 victories.

Zimbabwe with 42 defeats is present on top place of most losses in ICC World Cup whereas Sri Lanka with 35 defeats in 2nd on this list.

Now we will give the 2007 World Cup Highest Run Scorer. Ireland has chased the total of 329 runs set by England and this was the highest successful run chase by any team in all editions of World Cup whereas Bangladesh has also chased a total of 322 runs and placed second.

With 71 wickets, Glenn McGrath is the most wicket taking bowler in all editions of ICC World Cup and followed by Muttiah Muralitharan who took 68 wickets during his World Cup career.

The best bowling figures set by any bowler in ICC World Cup is 7-15 and this record is set by Australia pace bowler Glenn McGrath whereas Andrew Bichel with 7-20 is 2nd on this list.

Ricky Pointing with 21 on-field catches is the highest catch taking fielder in all edition of ICC World Cup whereas Rilee Rossouw with 9 catches is 2nd on the list.

Most Dismissals by Wicketkeeper

With 21 dismissals in World Cup Career, Adam Gilchrist holds the record of most dismissals behind the stumps and Kumar Sangakkara with 21 catches and stumps is present on second place