Today we will talk about  List Of Cricket World Cup Winners Since 1975. Most of our readers are in search of a compiled list of CWC Winners list Since 1975-2015. Must be looking for the ICC CWC Winner list. Don’t worry! We are going to share with you the complete history of the winner of the ICC Cricket World Cup from 1975 when West Indies won the 1st World cup till 2015 when Australia yet again become World Champion by beating New Zealand.

This was the 5th time that Australia became the world champion. Australia is the only team of the world that have met all 3 Cricket giants of Asia and defeated them in the Final of ICC CWC. 1999 defeated Pakistan. 2003 defeated India. 2007 defeated Sri Lanka. No doubt Cricket is the most interesting and most famous game among all the cricket lovers across the world. As we have already given a lot of the most interesting information regarding this wonderful game.

In this article, we will cover all the topics of interest about World Cup Winners So that the cricket fans find all info of the history of their favorite sport and all interesting moments occurred during World cups on our site.  All interesting historical moments regarding World Cup winners, how they won, runner up teams, and many other aspects.

So here we will provide a compiled list of the World Cup Winners since 1975 up to 2015. International Cricket Council started the Cricket World cup from the year 1975. All these World Cups being hosted by different countries and a lot of legend players participated in these Cricket world cups and made a number of amazing records. 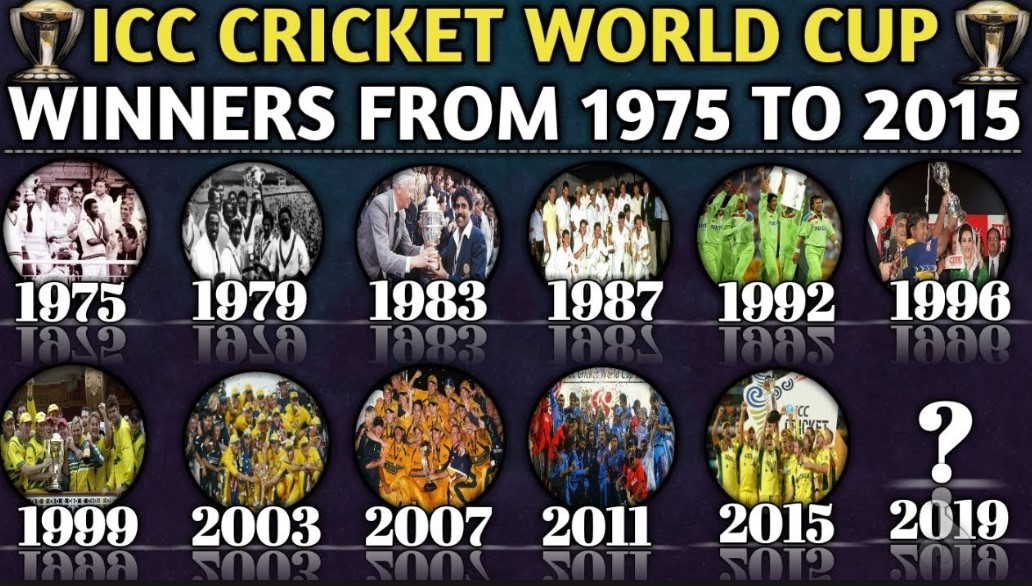 International Cricket Council approved the idea of the biggest cricket event of the world in 1975. This gave birth to the most scintillating cricket event that has attracted Millions of cricket fans to itself and in this way, 1st ICC Cricket World Cup was being played in the year 1975. The 1st venue of Cricket World Cup was England as a series of one-day matches and in these matches total 60 overs being played in each innings. For the first time, all cricket lovers found this event amazing and they showed much interest in this game. This Cricket World Cup was proved as a complete source of enjoyment for all cricket fans.

In 1987 India and Pakistan hosted the World Cup

For the first time in 1987, ICC Cricket World Cup was hosted by India and Pakistan. In 1987 World Cup rules were a little bit changed.As the total number of overs per match was reduced to 50 instead of 60.  Australia is the first team to win three consecutive World Cup tournaments.It is really an amazing record.  When the world cup started, the Winning title was won by  West Indies consecutively.  Further, read this article completely to get much more amazing info regarding this mega cricket event: 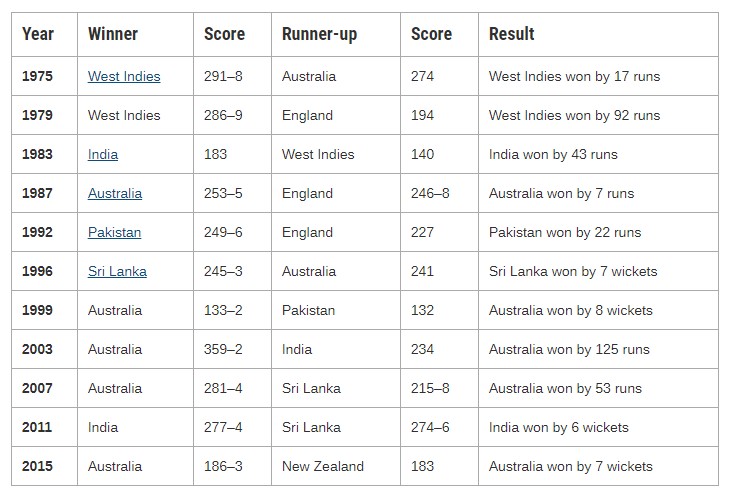 Complete Statistics Regarding Team Appearances and number of Their victories:

As we aimed to provide you all data about your favorite game history, so here we are providing a complete Cricket World Cup Winners Captain List who played and won the World cups in different years.  All cricket fans surely want to know about the winning team captains. The team’s victory surely depends upon the captaincy and all his strategies to win the match.

Its only depends upon the captain to lead a team and assure their victory by putting different strategies. Although it is true that World Cups are generally won by teams which are a good performer in all departments, however, the captain plays a Vital role when it comes to victory and the tournament and over the whole world cup, all teams who played and won the title are basically commanded by an excellent captain. If an excellent captain leads a team he will surely urge his team to do work hard.

However, the captain’s influence might be underplayed sometimes but his efforts as a leader are crucial if a team want to win the World Cup surely this team have to play under the directions given by their captain. The World Cup has been won by only 5 teams among total 11 editions of the tournament being played and during each of those tournaments, the captain of the team played a crucial part in the success of the whole team. Here is a compiled list of these shining stars:

Won the consecutive 2 world cup title and proved himself an unbeatable captain. His strategies to win the match were best ever and he urged his team to work hard and won the title.

India won the World Cup In 1983 under the captainship of Kapil Dev. He proved the best captain for the Indian team and won the title for his team by applying the best ever strategies.

Australia won the World cup for the first time under the supervision and guidance of Captain Allan Borde. He was no doubt the best captain.

Pakistan for the first time won the World Cup title under the captainship of great captain Imran Khan. Imran Khan proved himself the best Captain as well as a best guide for his team. Pakistani team moral increased after getting the World cup trophy through the hard working of Imran Khan.

Australia became unbeatable and adorable team under the captainship of Ricky Ponting and consecutively won the title for 2 times and became the first team who won the World cup for 3 times.

Although it was impossible for India to win the World cup trophy in world cup 2011 tournament MS Dhoni proved himself as the best captain and through his hard working and adorable strategies India won the World Cup title 2011.

Total 10 teams played the World Cup, Among all these Cricket teams, Australia Cricket Team is the most appreciable team in ICC world cup tournament as they became world champions for five times in the year of 1987, 1999, 2003, 2007 and 2015 respectively.

Australia team has proved that they are undefeatable by other teams as they have remained World cup winners for 5 times and no doubt it is a great victory. As the runner up teams also played very well but unfortunately, they could not win the title. All depends upon the chances, luck as well as the methodologies of the game.

That’s all was about the Winners of World Cup Titles Since 1975. Hope you enjoyed the article. Visit our website to get more interesting articles regarding the Cricket World cup. If you have any queries regarding this info feel free to ask from us. We will satisfy you surely by reliable info.