The 3rd season of the T10 league 2020 is going to start on 23rd October 2019. The T10 league 2019 was a big hit. We all know that every sports event begins with the Opening Ceremony. Then how is it possible that will miss the t10 cricket league opening ceremony 2020.  T10 league become attracted the attention of the huge audience from across the globe. The beauty of T10 league is that you get sizzling cricket non-stop 90 minutes action.

90 minutes of mind-blowing entertainment. Another important thing that attracts more attention is the presence of Bollywood and Lollywood stars in the league. In T10 league 2019, many celebrities from India participated in the T10 cricket league opening ceremony. 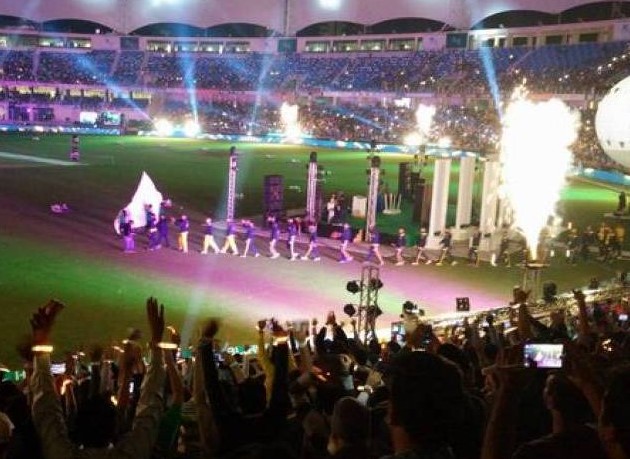 This year is going to be even huge. What is going to happen in the t10 cricket league opening ceremony? The cricket fans will get a chance to see live Pakistani and Indian Super Stars celebrating the gala of the most amazing format of the sport named cricket. The Opening Ceremony of T10 league 2020 will witness Bollywood stars like Salman Khan, Zareen Khan, Arbaaz Khan, Sohail Khan (Whois also the owner of Maratha Arabians and big names of cricket world like Shahid Afridi, Virender Sehwag, Eoin Morgan. After Shahrukh Khan and Pretty Zinta got the ownership rights of IPL teams, many celebrities and Bollywood families got involved in Cricket.

A glamour-filled opening ceremony of world’s first T10 Cricket League is being held at the Sharjah Cricket Stadium amid spectacular light show and performances by top celebrities. There was a beautiful light show in the opening ceremony of T10 league 2019. Sizzling dance performances from Pakistani and Indian stars. The Speech of the Excellency Sheikh Nehan bin Mubarak al Nahyan was a very important part of the Opening Ceremony T10 league 2018.

Followed by the Speech, other very important contributors shared their thoughts. These included a very interesting speech of Shaji Ul Mulk (President T10 League). After Shaji Ul Mulk, Dr. Nowhera shaik (All India MEP National President) shared her thoughts.  As Heera Group Of India is the major sponsor of the T10 League. The T10 league 2018 was named after the sponsor. Hera T10 League. After the Speeches, the trophy was displayed. The major center of attraction in the T10 League Opening Ceremony was the dance performance of Pakistani TV Celebrity Hareem Farooq.

The opening ceremony was attended by government officials, members of the Emirates Cricket Board (ECB), team owners and Bollywood celebrities.

The show stopper of the ceremony was Bollywood actress Urvashi Rautela.

Shaji Ul Mulk, chairman of the T10 League, was delighted by the support from some of the biggest names in world cricket. “The T10 League has been born in the UAE and it is here to stay and I am grateful to the massive support given to the league by the Emirates Cricket Board, the team owners, and all other stakeholders,” he said.

Zahid Hussein, the managing partner of Ghalia Group – the title sponsor, said: “We are pleased to support the T10 League, and share the same vision as the promoters of the league. We feel privileged to be associated with such an international tournament.”

West Indies superstar Dwayne Bravo, who will lead the Maratha Arabians in the tournament, predicted a batting feast for the fans at the iconic stadium. “There will be big scores for sure. I expect the batsman to dominate. Don’t be surprised if you see teams putting up 150 in 10 overs,” he said.

Meanwhile, Jawad Ghulam Rasool, CEO of the Sindhis team, said the addition of two new teams proves that T10 cricket is on the right track.

“It could be a game changer. A big T20 League normally takes three to four years to add new teams, but we have done it in the second season. That says a lot,” Rasool said.

As soon as the final schedule of  T10 Cricket League Opening Ceremony 2019 will be announced we will share it here. Keep yourself in touch with us to get sizzling aspects of this mega ceremony.